How do you improve on the former home of the Western world’s queen of domestic arts? Bring in architect John Fifield of Fifield Piaker Elman for a master plan designed to expand the house yet maintain its integrity and improve its relationship to the land.

bought this house on Turkey Hill from Martha Stewart in 2007 at the height of the teardown phenomenon. Already enamored of its fruit trees, its perennial gardens, its majestic beeches and its proximity to Westport’s town center, the couple made good on their quest to own it when their broker told them that all of the other serious bidders were ready to demolish the Greek Revival and carve up the four-acre property into lots.

“We bought it in March before any of the flowers were in bloom and still I felt the pull, the beauty of the place drawing me in,” says Casey Berg. “I loved the original moldings, fireplaces, how the 200-year-old pine floors creaked under my feet.” 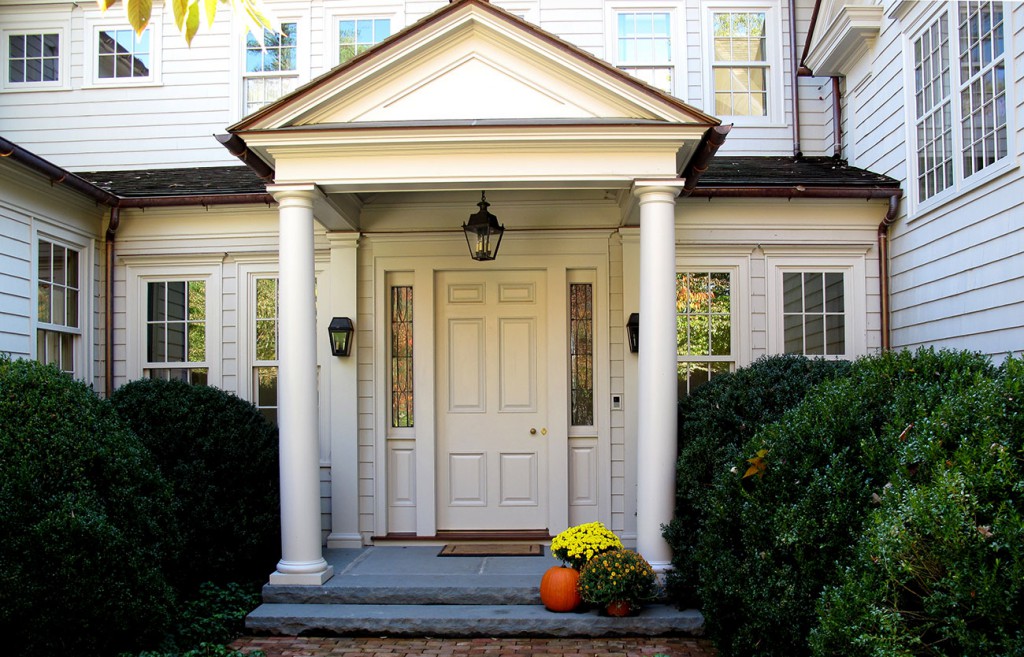 The Bergs made an offer and, as Casey says, did their part in rescuing the historic landmark with a view of Long Island Sound. As veterans of architectural alterations, the singer-songwriter and her healthcare-executive husband knew that to accommodate their children on weekends, they had to make some changes.

But how do you improve upon the home of the Western world’s queen of domestic arts? The Bergs hired architect John Fifield of Fifield Piaker Elman, which maintains offices in Westport and New York City. Fifield, who’d renovated other homes for the Bergs, quickly surmised that while living at Turkey Hill, the blonde monarch had been busy building an empire from a brisk commerce in products and advice on everything from espaliered pear trees and glue guns to enamel cookware and crème brûlée—and that it wasn’t solitary living as much as living with a film crew that dictated the configuration of her space.

“A lot of what was here was done for TV,” says Fifield of the house, which dates to 1820. “We brought the 21st-century lifestyle into a historic building.”

Fifield drew up a master plan that was equal parts restoration, renovation and addition, all of it designed to expand the house in an unobtrusive manner that maintained its integrity and improved its relationship to the land. A garden plan by Christopher Kusske of Kolkowitz Kusske Architecture Landscape Architecture in Rowayton imposed a new structure, organization and movement, seamlessly connecting the existing gardens with the new construction. (The house won a Historic Preservation Award from Westport’s Historic District Commission in 2009.)

Renovation included closets that meet today’s acquisitive standards; new HVAC, stereo and entertainment systems; a spacious family room whose ceiling is accessorized with sturdy reclaimed beams reminiscent of the home’s history; an expanded kitchen that reorients one’s gaze toward the extensive gardens; matching gables and balconies; and a master suite with a large balcony, soaring ceilings, and a dressing room fit for a runway model.

Fifield also formalized the side entry with an addition that links the main house to the carriage house, where Stewart filmed much of her show. Floors—wide pine planks in the old section, hand-tooled oak in the new—were all stained a consistent shade. Millwork in the new section of the house was fashioned to replicate that of the old section, as was the hardware.

Clients we’ve had the
privilege of working with